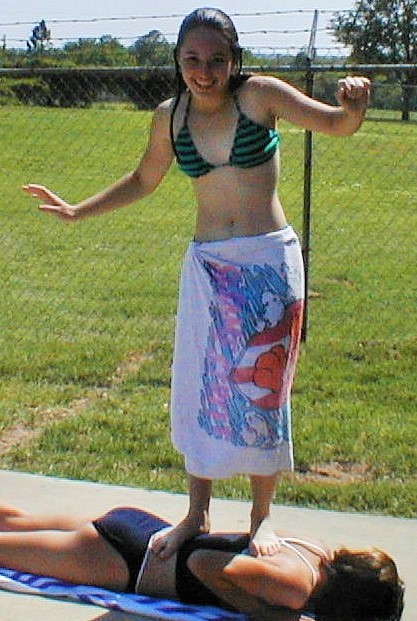 Having Fun at the pool

1. Never wear a nose plug. Stay away from the kids who wear nose plugs.

2. In fact, don’t hold your nose at all. The only exception to this rule is when you have to lay back in the water to straighten your chlorine greened hair out of your eyes.

3. Only babies play in the shallow end.

4. When you learn to dive, you are allowed to do it in the four foot water.  Squatting on the side with penitent hands is permitted when learning how to dive.

5. Go shopping for your swim suit with your Mom’s younger sister.  She will let you get a skimpier suit than your Mom will.

They told me they were too fat.

6. No peeking when the sunken treasure is thrown in the deep end.

7. Blow bubbles when sunken treasure hunting to keep your ears from popping.

8. Get the treasure the first time you go down for it.  It’s better to bust a lung than come up empty handed.

9. No wimping on the high board.

10. Everyone goes off the high board.

11. Respect those who have earned a higher swim badge than you.  Tadpoles answer to Fish, Fish answer to Whales, and Whales answer to Sharks.

13. Flip flops- also for sissies.  The soles of your feet should look like shoe leather by the end of the summer.

14. When your mom says it’s time to go home, keep playing for at least fifteen minutes.

This post is dedicated to my writing buddies in the Writer’s Workshop Institute, which I’m co-facilitating for the next couple of weeks.  I love working on writing skills with my teaching colleagues.  Writing Rules! 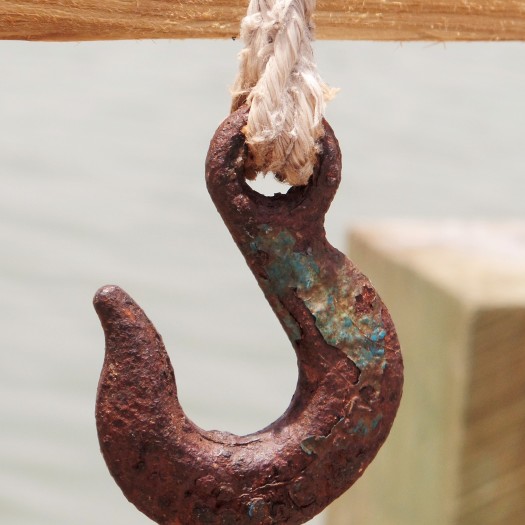 I liked the patina on this hook 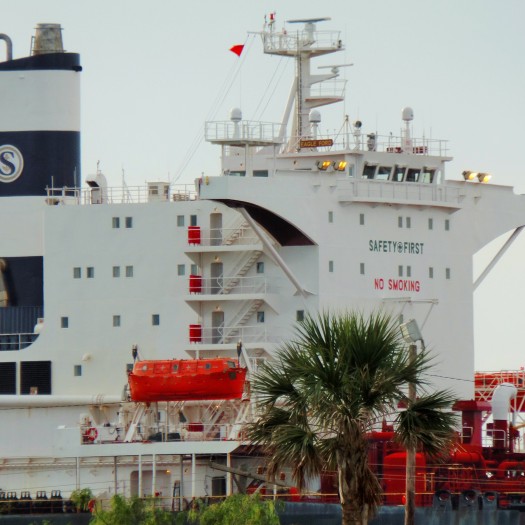 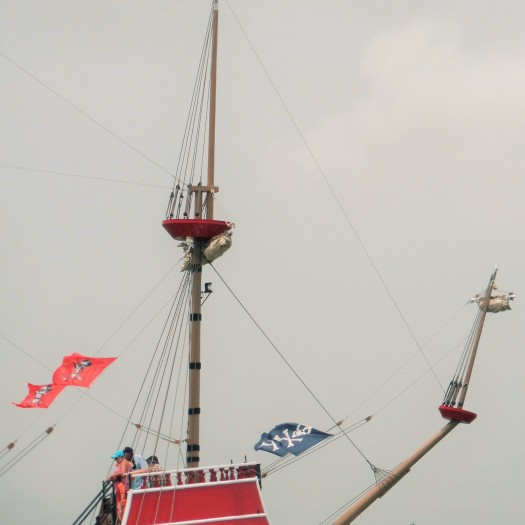 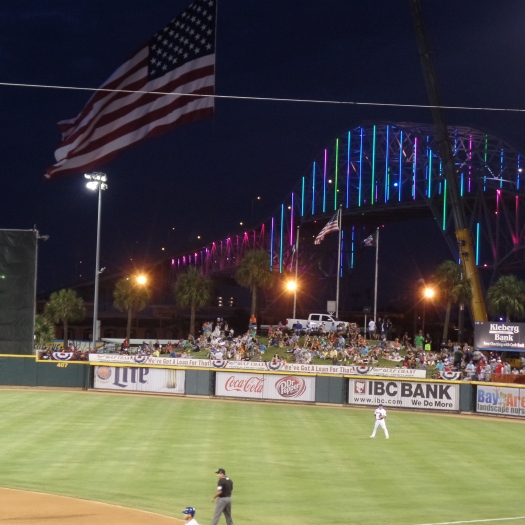 Bridge near the stadium

We saw many boats on our recent trip to the Corpus Christi area.  I was really impressed with the size of the ships that stood in the shipping channel outside of Whataburger Stadium.  Plans are currently underway to make the bridge in the background of this last photo forty feet taller.  Right now, the larger ships have to download materials onto ships the size of the big white one in order to clear the bridge into port.  It is hard to imagine boats bigger than this behemoth.

I played with my editing software to make the reds stand out on both of the two big ship pictures.  I need to take a photography course and invest in some different editing software. Someday, when my ship comes in.

When we were on our dolphin watch, long flat barges stretched all the way across the waterway.  The captain remarked that the barges were sometimes a nuisance, but they were a safe and cost efficient way to transport hazardous waste.  It was scary to think we were sitting that close to at least ten of these floating garbage dumps. 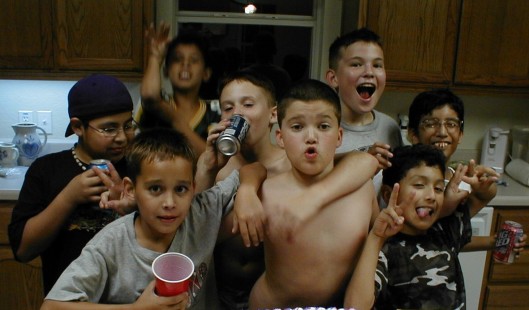 I will always associate summer with a special sort of ennui.  It’s not the laziness of a teenager, or the decadent half-life of European royalty.  It’s a zone in which, once you enter, laziness feels perfectly right and time suspends itself while you brush flakes of sand off your arm, or lay on your belly on the bed and slowly wiggle your foot.

This magic is easier to capture in childhood, for children are much more likely to expend all of their energy running barefoot through the sand, or playing ball until the sun stands high in the sky.  Children, who ignore their basic needs much longer than adults, tend to play until they are too—dirty, sweaty, thirsty, hungry—and throw themselves on the mercy of whatever adult is willing to feed and water them.  This vast expulsion of energy that leaves you feeling weak and on the verge of collapse seems necessary to induce that sweet dive into limbo.  It’s got something to do with the sun, too.

Grandmother and Pop– my summer people.

Grandmother was often our designated waterer, especially in the summer.  There were five of us living within two houses of Grandmother’s, my three cousins, my brother and I.  We were stair stepped in size, all within five years of one another from top to bottom.  Maybe because we were such a swarm, the adults shoed us out of the house early and often.  The five of us ran around barefooted until our feet were like shoe leather.  We did everything all out.  Chinaberry fights lasted hours (in our minds) and we strategized for days on end.  We played Bonanza.  I always got stuck playing Hoss, even though I was as skinny as the rest of them.  Our legs were horses, brown and sprouting so quickly that by the end of the summer my littlest cousin had to wear someone else’s shorts and my oldest cousin got to go to the Beall’s department store and buy new ones.

We weren’t smart enough to know when to come in by ourselves, but my Grandmother had some instinct in this.  She’d always call us in to lunch right about when we were starting to fight.  She’d pour each of us a glass in one of those aluminum tumblers with the bronze undertone.  We’d tell her what color we wanted, but she gave us what she gave us, and didn’t put up with kids who were picky about their tumblers.  We’d sit at the table swinging our bare legs, and one of us would start flicking the glasses, which made a, “Ting, Ting,” sound.  When you drank out of them, they had a metallic undertone, like when you nick your finger then pop it into your mouth to relieve the sting.  Nothing ever tasted better.

If we were good, she refilled our tea glasses and let us take them into the den after lunch, where Grandmother let us watch her soaps, As the World Turns, and The Guiding Light.  I loved that den, especially in the summer, because this is where that sweet magic happened.

Watching the soaps with my grandmother felt like sneaking an extra treat from the cookie jar. Our parents didn’t let us watch soaps at home, although I don’t think they had the overtly sexual themes and controversial topics they came to be known for in later years. And I also think our parents knew we watched them at Grandmother’s house.  Maybe they all colluded, deciding to let us do some things at Grandma’s that they’d forbid at home so they’d feel special.  Maybe my grandmother just told them how things were going to play out.

Lisa Miller Hughes Eldridge Shea Colman McColl Mitchell Grimaldi was my favorite character. Lisa was always in the process of divorcing someone and skulking around for a new husband. She had terrible things happen to her, like the two times she lost her mind, and how she faked her own suicide. She did mean things, like give up her child to get a better divorce settlement.  She said exactly what was on her mind, and her mind was as moldering as week old bread.  My grandmother loved her.  She laughed out loud and said things like, “That Lisa is horrible.  Isn’t she horrible?”

We’d sit up from our spots on the carpet and say, “Yes!”

Our physical needs were sated, and we’d run ourselves into a stupor during the morning. All that was left was listening to the tragedies and turmoils of soapdom and letting the sap of summer lull us into a state of perfect contentment.

The room was always dark and cool, and the drama played out before us so lush and lulling that we often slept out the whole afternoon on Grandmother’s den floor. Our faces carried evening tattoos of shag carpet marks, and we wore them like badges, wishing they’d last longer than they did as dusk fell and the grown-ups pushed out the door again.

Like my grandmother, I worked to create a space for my children to sit in the lap of that beautiful summer sigh that happens when exhaustion, hunger, thirst, and satiation collide.  And like my grandmother, I hope for the day when I have beautiful brown- armed grandchildren running around my yard hollering at the top of their lungs.  I hope I can feed them a bite of her pea salad and let them lay in my living room napping while the television plays low in the background.

But why wait?  There’s a sprinkler outside with my name on it.

We arrived early last Sunday morning to witness some Kemp’s Ridley turtle hatchlings waddle to the ocean to begin their amazing five day journey to the gulf stream.  While the turtles were fun, it was the people who caught my eye.

They turtle watched- I people watched.

Rangers were not sure of the odds for survival- they estimated between one in a hundred and one in a thousand. However, volunteers were on hand to insure that none of the hatchlings fell prey to a group of ever watchful birds who clustered around the release site in hopes of snagging what one ranger referred to as, “the Oreo of the sea.” 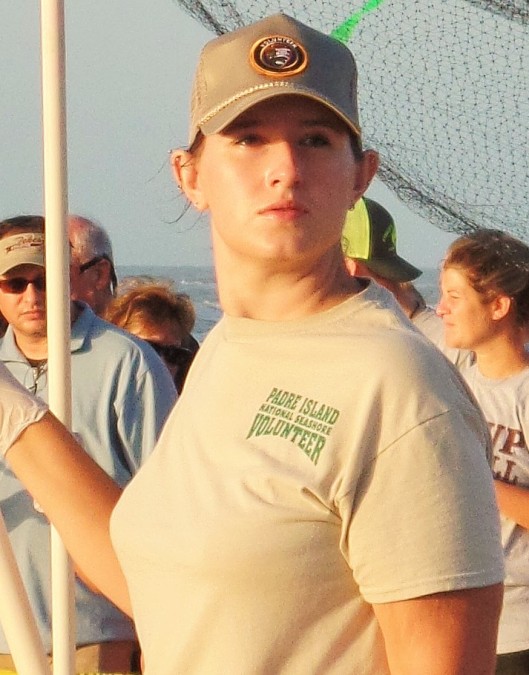 Vigilance in action- This volunteer uses her hawk-like vision to warn of bird threat.

The park rangers worked hard to ensure that the spectators had a good experience as well. They carried individual turtles around the audience so we could see them close up.

Taking pictures for the spectators

The rangers were also kind enough to take pictures of the turtles up close, carrying around handfuls of cell phones to accomplish the task. 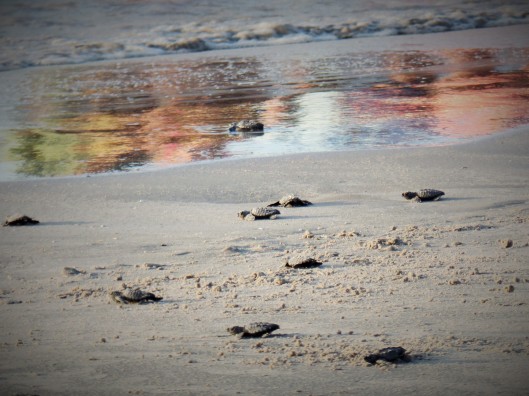 The hatchlings must cross a long stretch of beach to meet the sea.  This is because they need to imprint on the beach. When females imprint, they return some fifteen to sixteen years later to lay their eggs.

When these baby turtles return to Padre Island National Seashore in the summer of 2030, I hope they will be greeted by a group of dedicated volunteers and Park Rangers who will take care of their hatchlings and see them on their journey to the sea.

I am so grateful to the Park Rangers and volunteers for their work on this endeavor. The imprint that they leave on our world is much greater than the sum of turtles they protect. You can follow the Padre Island National Seashore or the Padre Island NS Division of Sea Turtle Science and Discovery on Facebook.  Let’s do all we can to support their efforts.