The Daily Post read my mind today.  Here’s the prompt: What’s the most elaborate, complicated meal you’ve ever cooked?  Was it a triumph or a fiasco? What follows is my response.

Yesterday, I made Apple Cinnamon rolls from scratch using the Pioneer Woman’s recipe.  So why are you writing about that in your regular piece called the Daily Discomfort, Joni?  Thanks for asking. I will tell you why. 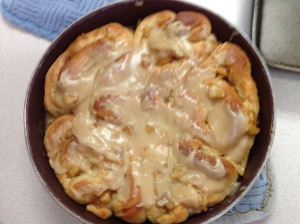 Most of my life, I’ve cooked because a lot of hungry people depended on me to feed them.  I can cook a mean Corn Dog and French fry dinner with one child on my hip and another in the floor throwing a wall-eyed tantrum.  I can walk in the door after a ten hour work day and placate five teenagers with peanut butter and jelly sandwiches, or a can of soup and grilled cheese.  I can make a brisket to feed twenty, a roast to feed ten, a turkey with dressing for thirty, and a scrambled egg sandwich for one.  All of my cooking is what I call subsistence cooking, meeting only the need to feed. For me cooking has always been associated with tired, cranky people who just want their fix.  In that sense, I’m like a dealer who doesn’t get paid.  I never had the time to let stuff bubble and rise and flavors to meld and marry one another.  The second things were made, they were consumed.  Sometimes food disappeared before we made the drive from the grocery store to home.

I took a personality test once, and I got an A.  That’s good, because I don’t like to make B’s.  If something seems difficult, I naturally resist trying it if it means I might not get it right.  To me, making cinnamon rolls from scratch seemed like an unattainable achievement.  I’m not sure why I put them on such a cooking pedestal, but I have always equated cinnamon roll baking with Top Chefs like Julia Childs.  Troglodyte, pedestrian type cooks like me would be way out of their league to attempt such lusciousness on a plate.

The History of Creative Optimism

I like to be good at what I try, and I don’t think it’s bragging to say I excel at the more creative and abstract activities.  But cooking, especially with dough and yeast, requires precise attention to the math of the recipe. Well, I find math rather restrictive. I tend to go off script when I’m cooking, because I like to try things in new ways.  I always feel at the moment that my culinary diversion will lead to deliciousness, but following my bliss has led to some legendary disasters.  My children can still tell you about the Night-Of-The-Spinach-And-Goat-Cheese-Pizza.  No matter what they say, it wasn’t that bad.

If it Makes You Uncomfortable…

You should probably do it.  This has been my motto for the last few years.  Now, for the first time in my adult life, I had the time and opportunity to cross the Cinnamon Roll Rubicon, so it was time to dispatch this phobia for good.

I went to the grocery store with an extensive list of ingredients, and double checked it before I left both the house and the grocery store.  I used a thermometer to make sure the liquid was not too hot before I put the yeast in the mix.  I cut the apples in itty-bitty pieces before marrying them with butter, heavy cream, and brown sugar.

The dough, I treated tenderly as I would a newborn baby.  Delicately, I rolled it out (I heard somewhere that if you spend too much time with the dough, it makes the bread taste bad) and then spread the gooey apple mixture over it.  When I rolled it up into a roll, the filling went all over the place, and the cut up rolls were hard to handle because of the filling.  They looked a bit like intestines sitting in the pie tins, but I figured they would probably taste okay.  And after I slathered them with icing, you could hardly tell they looked like body parts.

And man, are they good.  They taste like love and butter. I wish you were here, because I’d make you a big cup of hot coffee, warm up a roll, and we’d eat them on the back porch and talk about the next thing we want to conquer.

Have a great Thanksgiving, everyone!

This week, my new food processor is making me  a very happy girl.  It’s an Oster, and it has attachments for a blender and smoothies as well.  It has 1100 watts of power.  Some of you may be aware of Bloody Monday, in which I attempted to make beet hummus without a proper blender.  This time, I think my broccoli dip looked pretty much like the picture in my September Cooking Light magazine. You be the judge.  Just don’t tell me if I’m wrong.  We all need our illusions.

My rendition! It was good, too. No cook- taster this week!