The Mozart House in Salzburg, Austria

When Alan, our tour guide, pointed out the unassuming house of Wolfgang Amadeus Mozart, I suddenly felt tears prick my eyes. In the middle of a busy thoroughfare in Salzburg, Austria, I was transported back to a time in my life when emotions were so much more accessible than they are now.

As a college sophomore, I sang the role of Cherubino in Mozart’s Marriage of Figaro. I fell in love with his music when we began to rehearse the end of Act IV.  This video from the film, Amadeus, depicts the scene, in which the Count begs the Countess for forgiveness, and all is resolved.  As I stood on stage during the first performance, I remember thinking about how each of the characters had a different motivation in this scene, yet each character played an important role in the ensemble that created this majestic work of art. It was an incandescent moment, one in which I felt everything was right with my life.  I had tears in my eyes at the end of that performance, and Mozart had put them there.

Notice how the characters stand still, facing stage front.  In this scene, it’s all about the music, and the music is just glorious.

I don’t know if Mozart was the first to layer characterizations through music this way, but it was certainly my first experience in which characters, singing from different perspectives, for different reasons, captured musical lightning. I don’t know much about music history, but I can see this layering of characters in many contemporary musicals.  Here is a scene from Les Miserables that demonstrates the way many characters with many different motifs come together to form a whole.

See how the art form has evolved?  The characters move.  They all have different things to say.  I can’t begin to imagine how difficult it must be to write a scene such as this.

Why did I cry when I heard that I was standing on the same street where Mozart had once stood?  Why did I pay ten euros to go into his birthplace to view his child-sized violin and examine a tiny lock of his hair?

It wasn’t because he changed the world, although it could be argued that he had a profound effect on the music and musicians that came after him.  I didn’t cry because it surprised me to learn about him during our trip to Salzburg. I knew he had lived there and had expected to hear about him.

Music is where my beautiful tears originate.  What about you?  What beautiful thing can reduce you to tears?

Okay people, we didn’t take a walk last Saturday, March 28.  We were tired from our trip to Germany.  We mowed the lawn and took a long nap. 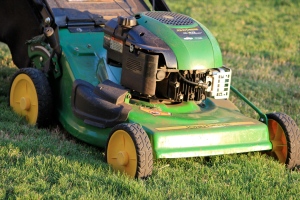 The grass was knee-high.

Super Husband shredded on the tractor and I mowed close to the house.  He had a much bigger job than I did, but I kept the laundry going. 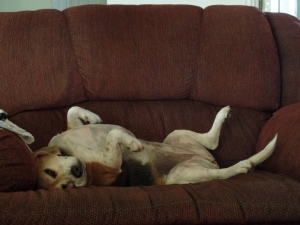 We slept that afternoon just like the dog does– with utter abandonment and lots of snoring.

However, since today is Sunday and we DID have an interesting Sunday on March 21, here are some pictures of the “Sound of Music” portion of our trip to Salzburg, Austria.

The arbor at Mirabelle palace.

Fountain in the Mirabelle Palace Gardens

Channeling Julie Andrews- I’m the one in the brown coat.

For those of you who know me personally, I was sorely tempted to sing, “Do, a Deer,” while standing in the self-same locations which Julie Andrews (!) stood while filming The Sound of Music.  I squelched myself, because (1) the guide said singing season was in the summer, (2)because I was the only gobsmacked choir nerd in my tour group,  and (3) the tour was rather hurried, so I’d have been left behind if I’d have started singing.

In the summer, people appear dressed in their Sound of Music garb and the Mirabelle palace Garden is alive with the sounds of amateur singing troops, professional musicians, and student players from the Mozarteum, an elite music school located in Salzburg, Mozart’s home city.