Excuse for why I'm not blogging, Margaritas on the beach, Vacation

Last week I went to a conference for work and convinced myself that I’d be able to keep up with my posting schedule. Nope.  I didn’t even have internet in that archaic place. Now, I’m on vacation, pecking away at my computer to tell you I’ll be away for the rest of the week.  When you’re on vacation, other people are always involved, so I’m forced to relax on the beach and sip cool drinks instead of wax prose- etic here on the pauser.  I’ll be back to my regular schedule in a few days.  Hope you guys are having a great summer.

Last Saturday’s walk was a doozy.  We traveled to Munich last week, and on Saturday we took a tour into the Bavarian Alps to view King Ludwig II’s Linderhof Castle, the village of Oberammergau, and Ludwig’s unfinished mountain hideaway, Neuschwanstein Castle.

I’ll be sharing a lot more about this trip in the weeks to come, starting with this sampling of the sights from Saturday, March 21, 2015

King Ludwig II, known as the Mad King and the Fairy Tale King in turns, built Linderhof as a tribute to Louis IV, the Sun King.  It is extremely small by palace standards, but it’s absolutely beautiful. 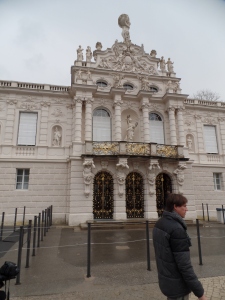 This small gem is well worth a viewing.

Look at the mountains in the background, not the brave lady about to get “swanned.”

An intrepid traveler(not me) feeds these assertive swans.

This village is known for the Passion Play that villagers have been performing every ten years since the middle ages, its skilled woodworkers, and the paintings that villagers display on their whitewashed houses.  The guidebooks say this is a cheesy little village, but I happen to like cheese.

Meandering through the village of Oberammergau .

Oberammergau’s next Passion Play is in 2020.

Ludwig II didn’t finish this castle, which he built in the medieval style and in tribute to musician Richard Wagner.  It’s worth the steep 1.5 kilometer climb to the castle grounds the the 300 steps inside the castle to view this work. It’s kind of like viewing the Titanic– Ludwig’s overspending and mania to complete not only this but another huge Versailles -fashioned palace in the region led to his cabinet ministers placing him under house arrest and having him declared mentally incompetent.

Neuschwanstein’s front facade- much of the castle remains unfinished.

What a view! Thanks to Vi for taking the photo.